Recording in the studio. Mmmm.... 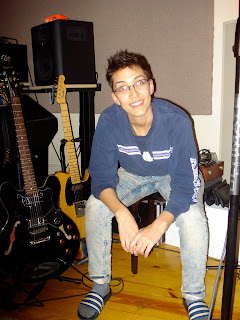 FINALLY, after years of writing, months of planning, and weeks of arranging, Ashley Baier and I headed to the studio today to record drums and extra whatnots.
We headed to Gardentone at 11:30 with a full bag of bagels and snacks and OJ, and a car full of drums and guitars. I picked Ashely up at her place, we loaded her gear into the car, and navigated our way to Williamsburg to the studio. 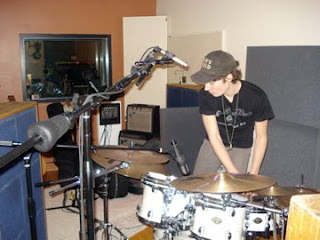 Steve Wall met us at the studio and immediately we started setting up drums and mics. Believe it or not, this part of the day took about 2 hours, and that was an extremely fast setup. Ashley used a good deal of Steve's drum set which was already in the studio with mics already mostly arranged. Still, we had to get everything set perfectly, put up sound barriers in the right places, and also make sure that Ashley could see me through the window into the control room. 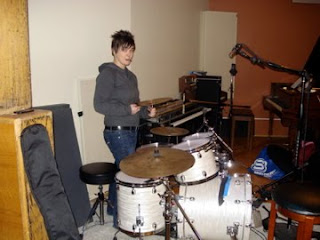 While Ashley and I both made sure we looked superfly for our day at the studio, it only took about 10 minutes of working to give us both earphone hair, one of the many dangers of recording. Of course, at some point early on, I had to change out of my stylish shoes and into my comfy comfy sandals... 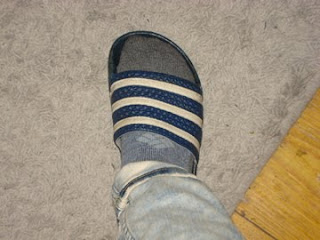 Once we had everything set up, we started going down our list of songs with drums. We had rehearsed each song approximately 2 times together, and Ashley nailed them ALL. I wish you could have heard how great she was. The songs have such energy and drive now - I'm super excited. While we recorded the drums, we also recorded guitar and vocals. Since we were doing both at the same time, we couldn't use acoustic guitar, so we focused on electric guitar tracks. Here I am enjoying Steve's fancy new Fender. 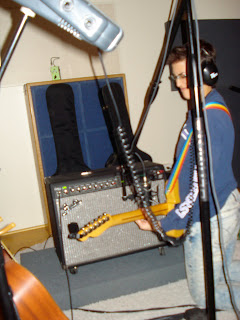 We had a break for dinner at 6:30, then back to work. Around 10pm our friend, Melissa Li came by (WITH homemade sushi!), providing a much-needed morale boost as we started getting a little goofy. Once we finished drum tracks, we started in on some other extras. We took advantage of Steve's beautiful piano and I started tracking a brand new song. Ashley did some extra percussion parts, and I had some fun with amps and feedback. About 11:30pm, we were exhausted and even more goofy, and decided to pack up for the day. 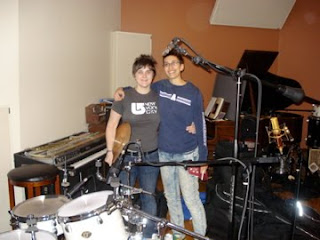 I drove Ashley and Melissa home, came home myself, walked the dog, and went to SLEEP. As soon as I have a chance to go through the tracks, I'll post a sample of one or two of the songs as they currently sound (probably on my website). For NOW, enjoy the pictures!
Posted by Mara Levi at 11:33 AM No comments:

So. Life got a little crazy on Monday, and my scheduled got twisted around. I went to Whole Foods for my first day of work to find out that I couldn't start until after my orientation, which was scheduled for Wednesday (that's today). Realizing that it would mean I would not be able to make the trip to DC over the weekend to rehearse, I quickly called Liz and Nancy who were super sweet and flexible, and I drove to DC to meet them Monday night instead!
Good news on the CD front: That meant I had 8 hours of car time to listen to my demos and start making notes about tempos and possible backing vocals. I also started listening to my favorite CDs to pick out sounds I want to include on my album.

Conclusion: My favorite CD of all time (right now) is Whitechocolatespaceegg by Liz Phair.

NOW I'm going to Whole Foods.
Wish me luck!
Posted by Mara Levi at 6:57 AM No comments:

Today slipped away. I slept in (had a great show last night and then dinner with my DAD, who was in town, but didn't get home until 1:30) and then got swallowed by errands. And I got convinced to go to yoga and grocery shopping. So, with a house full of delicious food, a lengthened spine, and a heavy heart, I report that I did NOT do any of my music homework today. Tomorrow I start working at Whole Foods, which I'm REALLY excited about, both because I'll get to learn a ton about beer, coffee, and cheese, and because it has been more than 6 months since I have made money doing anything but playing music. It will be nice to be able to go out to dinner once in a while.
TOMORROW, I will get lots done. Don't worry.
And today I DID confirm that I WILL be recording all day on Friday. With Ashley.
Here's to getting more done tomorrow...
Posted by Mara Levi at 11:13 PM No comments:

Two days worth of posts. Oops.

After making a big promise to my mailing list about how I'm going to blog every day, I missed a day yesterday. I blame PMS. It's a very difficult 2 weeks of every month for me. But yesterday I did lots of work practicing my new material since I have a show tonight. Still haven't learned all the words to my new songs, but hopefully I can muddle through.

TODAY the big news is that I finally know my schedule for next week, and it WILL include studio time at Gardentone on Friday! I'm super excited. I have lots of work to do now to prepare - have to get all of the tempos for the songs set, and make sure I know all of the forms. Once the drums are laid down, it will be much more difficult to change my mind.

OK, time to memorize words!
Posted by Mara Levi at 2:43 PM No comments:

So many new songs!

I've had several people ask me which songs are going to be on my new album.
I'm taking time today to go through my list and finish writing the last few songs. Here's my list so far.
(THIS IS NOT THE FINAL ORDER!)
- So Long My Love
- Is This My Life?
- She Says She Knows
- So They Say
- What if We Try
- There Rose a Rose
- Hallelujah
- Gotta Get Out
- Tired Lonely Fools
- Sing So Loud
- Friends and Fools
- new song (not done)
- new song (not done)

I have some really really rough demos done - not good enough for posting, but I'll try to polish one or two of them up so you can get your ears on some previews.
Now, back to writing!
Posted by Mara Levi at 11:57 AM No comments:

After years of pressure from friends to graduate from my dinky myspace blog, I have decided to start a real live actual blog to help document the process of creating a new CD. Especially because I have asked for so much help from you (my fans - hi!) to create the CD, I thought it would be nice of me to give frequent updates about my progress.

And here we are. We Listen to Fools is the name of the new CD I'm working on. I have 11 completed songs, and 2-3 more to write. I have big plans for this album - I think the songs are really radio-friendly, I'm not planning to print CDs - just T-shirts with album art and then digital music that everyone can download, AND, I'm planning to work with some FABULOUS musicians, engineers, and designers.

1/8/10
Rehearsed with Ashley Baier, the fabulous drummer who will be recording with me! We played through a FEW of the songs more than once, but she's so good, that's all we needed to do. Also, she has a huge house and 2 cats. What's not to love?

1/11/10
I went to Gardentone Studio today and met with Steve Wall. We talked for about 45 minutes and he gave me a small tour of his studio and some of his recordings. It got me SO excited to get back in there!

A note about the funds:
As of 1/13/2010 we have raised $1500 for the production of the album. THANK YOU to everyone who has contributed! If you haven't, but would like to, please go to www.maralevi.com and contribute whatever you feel you can. At the very least, in exchange for your contribution, I'll give you a copy of my new CD. If you'd like to give more, there are other goodies in store. More about that later.

Now I'm off to a job interview because this computer doesn't pay for itself!
Can't wait to talk to you more,
Mara
Posted by Mara Levi at 10:45 AM No comments:

Mara Levi Does Not Listen to Fools