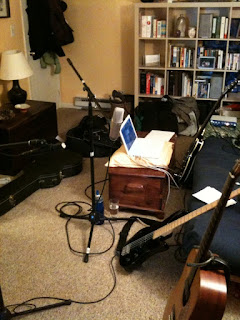 OMG, people, I had 2 days off from work, PLUS I worked the closing shift on Saturday which meant I had until 2pm to work on recording. This was, indeed, a busy busy recording weekend (see the picture of my living room, which stayed that way until about 5 minutes ago). I would say I went from being 45% done with recording to 90% done in just 2.5 days. I also went from being extremely stressed that I'd never finish to feeling confident that I'm nearing the end. SO, now the good news!

I finished bass, acoustic guitar, and MOST of the electric parts this weekend. For all the songs! I have a couple of half-finished maybe songs (maybe they'll make it to the album, maybe they won't), and I haven't worked on those yet. BUT, the following songs are ready for backing vocals, lead vocals, and finishing touches:

This weekend also featured an interesting near catastrophe wherein my 25-year-old Casio keyboard ALMOST went kaput. Somehow, while I was on the phone with my mother (who gave the keyboard to me as a gift when I was 8), it got better. I can't explain where it went, or why it came back, but I'm grateful to the Casio gods for having created such a fine piece of MIDI equipment in such a compact and resilient package. I used the keyboard today to work on Sing Hallelujah. It's a very simple song, and I thought it would be fun to add some electronic sounds to it. I think the sounds I found are OK, but not exactly right. But here's an idea of how it MIGHT sound when it's done. What do you think?

After so much productivity, I can't just give you ONE sample, so I thought I'd give you a bit of Tired Lonely Fools too since it's one you have probably heard if you have seen me (or the Pushovers) play live in the last year or two. I think this still needs a bit more, but it's going to have tons of vocals so I don't want to overdo the instruments. They say you can always mute them later, but I tend to get attached to the way things sound, and have a difficult time letting them go. I find it's best for me to edit early.
Anyway, Tired Lonely Fools:

It is now time for me to drive to the airport to get my girlfriend, whose absence this weekend may or may not have facilitated a great deal of the work I got done. Not that she gets in the way, only that I tend to want to play (and eat) instead of working. Maybe I should erase this sentence.

Happy listening!
Mara
Posted by Mara Levi at 12:25 AM 2 comments:

And my fingers show it! As I type this blog, my left fingers are feeling the computer buttons. Why doesn't Mac make a computer for guitar players where the keys your left hand types are cushiony and covered in lotion?

Today I added Acoustic Guitar to Gotta Get Out and Sing So Loud. Both are songs where the acoustic part is going to be largely covered by the electric guitars, but I wanted the texture and added rhythmic specificity that only an acoustic guitar can provide.
Here's the same sample of Gotta Get Out that I posted earlier on the blog (I think), but now with Acoustic guitar mostly in the right ear.

Gotta Get Out with Acoustic Gutiar

Two days in a ROW!

Can you believe it?!
THIS is what I INTENDED to have happen with my blog. It is entirely possible that I will have MORE to post TOMORROW!
I'm excited about it.

So today I am reposting a similar section of Is This My Life because, after listening, I decided that the guitar wasn't punchy enough. I spent this morning redoing that guitar and also adding acoustic guitar to So Long My Love. Just a few more acoustic tracks to add and then I can add ELECTRICS! I'm excited about that as well.

So, for your listening pleasure, Is This My Life with fixed up guitar:

Is This My Life

Yay, finally some time to record!
Unfortunately, the two hours I had this morning were not as fruitful and productive as I had hoped. I had a long drive last night to think about backing vocals and electric guitar parts and other exciting additions, but instead I decided to focus on the Bass part for Is This My Life this morning. I thought I could knock it out quickly and move on to something else, but the part I have been playing with the band just does not sound right to me here. Either it's the drums that are different, or I'm just finally listening with a critical ear and realizing that paralleling the guitar part for the whole song is kind of boring and not particularly idiomatically suitable. So I decided to try to change my bass part, but now I'm worried that it sounds strange. Maybe it doesn't sound strange to YOU, but only to ME because I'm used to the old part.
What do you think?

Is This My Life with new bass

It was frustrating not to get more done, but hopefully on my way to work this afternoon I'll listen to the new bass part and love it a bit more. My plan is to spend a few more hours recording tomorrow morning, then use Sunday morning for some other design work I need to do.

I also have been in touch with Sarah Gensert (www.stumpdesign.com) about starting the design process for the t-shirt/website. THAT will be fun.

Thanks for listening,
Mara
Posted by Mara Levi at 1:27 PM 1 comment:

Ever have one of those days that is as frustrating as spending 2 hours in line at the DMV only to find out that you don't have the right papers and you have to come back and wait in line again another day?

Yesterday was that day for me. I actually DID have the DMV experience, followed by a return home to find that the dog had made a mess of the house (again). Feeling defeated, I decided to scrap my other homework and do some recording. I had been wanting to get rid of the scratch electric guitars on several tracks, but hadn't had time to set up the mics for the acoustic.

So, I did the setup, changed my guitar strings, downloaded an update to ProTools so that it would actually start playing from the MIDDLE of the song instead of only the beginning, and then got to work.

By the time I started, I only had about 4 hours left of good recording time, so I started with Tired Lonely Fools. For some reason, I was really happy with the first several takes, but when I went back to edit them together, I couldn't find a take I liked for the beginning of the song (which is probably just going to be guitar and voice). I proceeded to spend the next hour trying to perform those first 15 seconds well, and I finally SUCCEEDED! Somehow, even after my frustrating morning, I knew that it would be worth pushing through and coming up with a take I was happy with.

After a bit of editing, I moved on to the acoustic guitar on a new song (tentatively called Friends and Fools, but I think that's 3 songs on this album that talk about fools, so clearly I need a different name) and Is This My Life. Props to Nancy Eddy who has been playing guitar on that far more often than I do. I had forgotten how hard it is on your forearm and shoulder! I had to do it in 2 separate takes, going about 1 verse per take, then going back a bit and starting the second take so that they overlapped a bit, but so that I got breaks for my arm in between takes. I believe that's what the French call time-to-get-off-of-your-butt-and-work-out-Mara.

SO, by the end of my 4 hours, I had comped together all 3 of those guitar tracks AND was feeling far less frustrated than when I was at the DMV earlier in the day. For your listening pleasure today, here's something from the middle of Tired Lonely Fools. Sorry most of the sample is a fade-up. I was in a hurry. The fun of this section of the song is that it's going to have LOTS going on - this is just the skeleton. I'm excited to add bass, lots of backing vocals, and probably some other silly instruments to this section. But here's the foundation:
Tired Lonely Fools Sample
**note: It takes a couple of seconds for the sound to start bc the fade up was long for some reason (some reason is that I accidentally made the fade too long).

Feeling energized and hoping to have more recording time tonight. Maybe it's time to add bass to a few of these.
Posted by Mara Levi at 8:53 AM 10 comments:

Mara Levi Does Not Listen to Fools